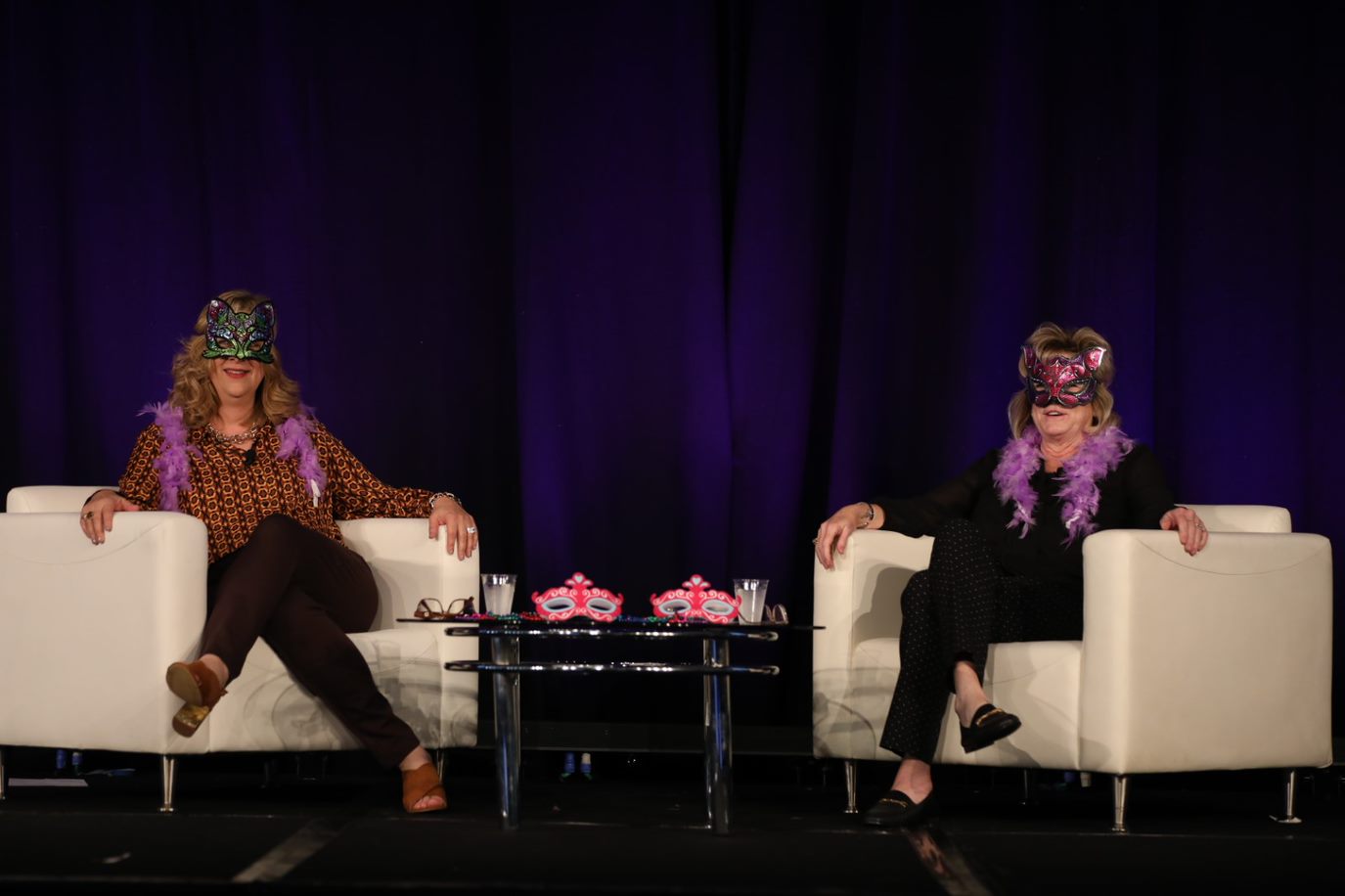 The AONN+ Acuity Project Initiative is a full-scale, multiyear AONN+ project, the purpose of which is to create an acuity tool that can successfully be used by navigators across a broad range of settings and roles. Danelle Johnston, MSN, RN, HON-ONN-CG, OCN, Genomic Life, Head of Clinical Services, and Tricia Strusowski, MS, RN, Independent Oncology Contractor, have been the AONN+ Acuity Project Initiative committee’s driving force since its beginning. In their presentation, Ms Johnston and Ms Strusowski gave a thorough history of key events in the development of the acuity tool, from the early conceptual discussions to its anticipated rollout.

As they are now nearing the final stages of development, Ms Johnston and Ms Strusowski were able to report on the research they have conducted thus far with focus groups and others. To that end, at the conclusion of the presentation, they invited any interested navigation programs that meet the inclusion criteria to participate in the next step before the tool is ready to launch, that is, the large-scale testing of the tool on patients.

The AONN+ Acuity Project Initiative kicked off at the 2018 AONN+ Annual Conference when, in the course of discussions about the AONN+ Metrics Tool they were then testing, Ms Johnston, Ms Strusowski, and others who were involved in the Metrics Tool identified a need for a separate tool that would fill a gap in navigation practice. Namely, they realized that they needed to have a way to measure the level of intensity of the resources and services that navigators provide for patients. 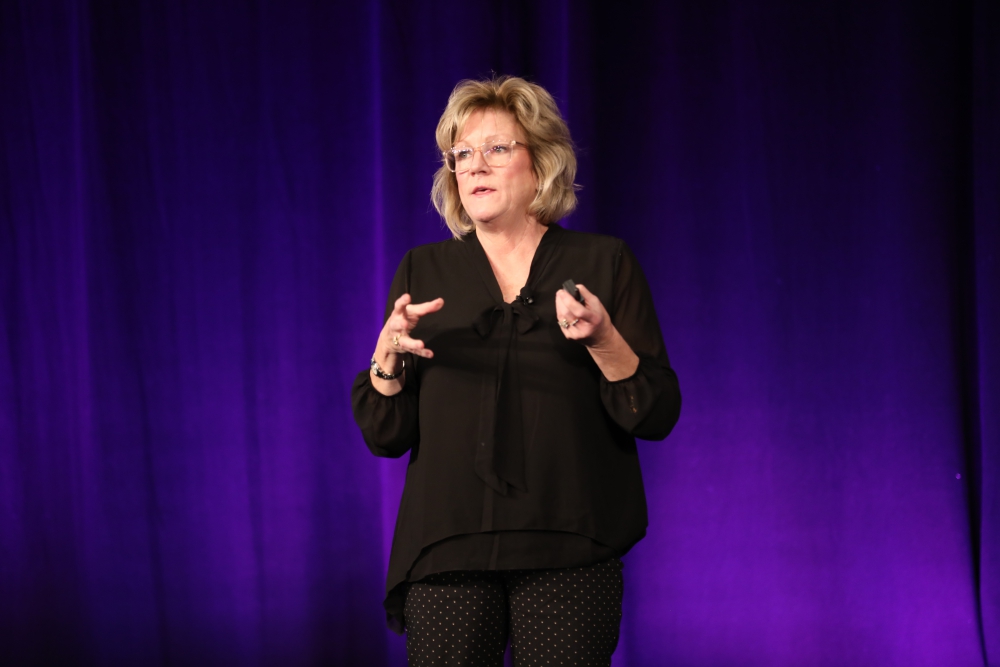 They assembled a working group and secured funding for the project and began to dig into the published research on acuity. Their first task was performing an extensive literature review. After an exhaustive survey of the field, the committee members gathered at a retreat to synthesize what they had learned from their research. The next step was to think about their objectives and the design of the tool. The committee wanted to create a tool that would be appropriate across the different settings and roles that navigators occupy in practice. They also wanted to ensure the tool could be easily incorporated into existing practices, workflows, and infrastructures. Finally, they wanted it to work within other relevant national guidelines and AONN+ navigation metrics.

This research and development continued among the committee, with the publication of journal articles and the subsequent creation of a national think tank composed of expert thought leaders. The role of the think tank was to tackle some of the challenges that arose when the evaluation process began. The committee worked with biostatisticians who applied a principal component analysis—the best technique to look at this large amount of data and increase its interpretability. After incorporating what they had learned from the think tank, the tool was ready to be tested with navigators. Although the COVID pandemic put an abrupt stop to some of the in-person evaluative work, the committee instead began to host virtual focus groups to get navigators’ feedback about how well the tool accounted for patient barriers and if it fully assessed the intensity of service provided by navigators. The results were not quite what was hoped for. Although this seemed at first to be a setback, it was actually an opportunity to improve on the original model. These newly collected data were given to the biostatisticians again who further refined the tool. Finally, it was at the point for the committee to evaluate it in practice, but not on real patients yet, so they created 10 test cases and asked for navigator feedback. Many felt that “critical barriers were missing from the tool,” and that other measures were not in line with actual practice. Again, they refined and revised the tool. Some of the updates to the earlier model include adding new barriers, incorporating definitions of terms, and providing the ability to record the patient-reported distress score. The newly revised tool will very soon be in the stage where it can be tested with patients and navigators in the field. Programs or individuals who would like to participate in the testing are invited to apply.

In this session, Carmen E. Guerra, MD, MSCE, FACP, Ruth C. and Raymond G. Perelman Professor of Medicine Vice Chair of Diversity and Inclusion, Department of Medicine, Associate Director of Diversity and Outreach, Abramson Cancer Center, focused on issues surrounding diversity, equity, and inclusion that affect patient outcomes. She emphasized that the navigator can, and should, take an active role in removing these barriers for underrepresented minorities.

Dr Guerra presented a case study of a cancer patient—a single, uninsured mother from North Philadelphia. Dr Guerra used this example to unpack the implicit or unconscious bias that manifests through assumptions that can lead to, for example, failing to offer clinical trials to some groups. She also used this case to illustrate the ways in which navigators can be active in removing barriers for patients in underrepresented groups. As she explained, the described patient had received a free mammogram and, following some suspicious findings, was later diagnosed with triple-negative, stage II breast cancer. The patient is enrolled in Medicaid, she has limited English skills, and she does not have a car. She is a former smoker and does not use drugs or alcohol. After her exam with the oncologist, during which she was found to have controlled diabetes and stable asthma, the physician offered her the standard of care; she was not offered a clinical trial for triple-negative breast cancer even though she may have been eligible for one.

Studies show that although more than half of the patients who are invited to participate in a clinical trial accept, between 19% to 76% of patients are not offered the opportunity. Furthermore, only 3% to 5% of patients diagnosed with cancer enroll in oncology clinical trials, and of them, only a small number are drawn from underrepresented minorities, including the elderly, race and gender minorities, and patients from rural areas.

Why, she asked, is the participation so limited when researchers have found that there is no statistically significant difference in the rate at which people of different races participate in clinical trials? In other words, minority patients are not turning down trials in greater percentages than others, yet they are vastly underrepresented. “Physicians and research principals are the gatekeepers of trial participation,” said Dr Guerra, and clearly there is much room for improvement. As Dr Guerra showed, bias acts as a barrier to clinical trials for underrepresented groups. “Biases are the assumptions we make up about people before we learn who they are,” she said. Simply put, everyone has bias.

To demonstrate that our own biases are not necessarily obvious to us, she provided some examples of the mind at work. These revealing thought exercises show how bias awareness is largely lacking in most individuals. While bias negatively impacts clinical care and clinical trial recruitment, it can be identified and changed.

She recommended that caregivers learn to identify their own biases, and one way to do that is through ASCO-ACCC’s “Just ASK™” program, which is the first implicit bias training that is specific for cancer research teams. Preliminary analysis of this training suggests that it is easily learned and implemented. Dr Guerra added that the ASCO-ACCC Equity, Diversity, and Inclusion Research Site Self-Assessment is focused on identifying structural opportunities to change the design of the system and offering resources to support change. Dr Guerra discussed how navigators can remove these barriers to care. As patient advocates, they can assess patient literacy and understanding, facilitate access to care and trials through referrals, and advocate for culturally appropriate and inclusive care.

Becoming the Story: The Power of PREhab 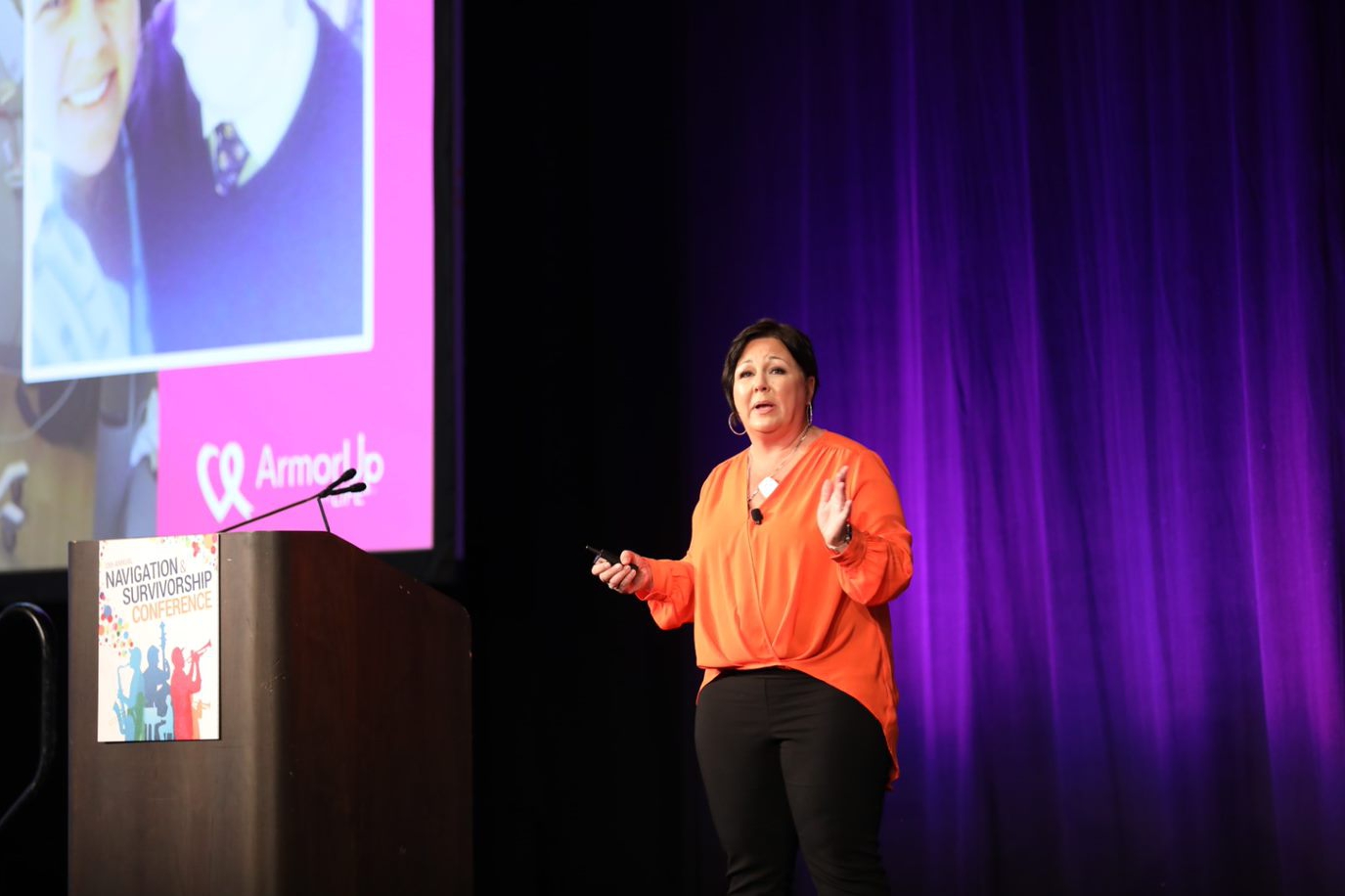 Loriana Hernandez-Aldama, founder of the nonprofit Armor Up for Life, gave a personal and powerful talk that centered on many of the themes reverberating through the sessions of this conference. Ms Hernandez-Aldama described herself as a person with many roles: an author, a medical and fitness reporter, a health coach, an Emmy Award–winning journalist, a proud Latina with a biracial family, and a wife and mother. She also survived cancer twice and is a patient advocate who made a promise to help change the cancer care landscape if she survived her ordeal.

At the time of her leukemia diagnosis, Ms Hernandez-Aldama was working in television as a medical reporter. She had a young son, and she described herself as being “physically fit and well connected.” She recalls how she nevertheless was completely unprepared when she learned that she had cancer. Within hours she would have to say goodbye to her child, leaving him in the care of her mother, while she was hospitalized for the next year. Over time, as she struggled to survive, her husband lost his job, they had mounting medical bills, and Ms Hernandez-Aldama’s mental health was faltering. She said, “I’m a veteran of a different war. I didn’t fight for my country...but I fought for my life. I was lost, broke, and broken.”

As much as she was suffering from many long-term treatment-related complications—both mental and physical—she recognized that she occupied a position of privilege. Her connections and financial resources had opened doors for her care. However, she says, “my ethnic background nearly killed me.” She had learned early in her cancer journey that there was no research on Hispanics affected by the AML leukemia mutation she carried. Nor was there any diversity in the bone marrow donor registry. There was no match for a crucial bone marrow transplant. She discovered—and reported—that the odds of finding a donor match based on ethnic background were very low. In fact, for Black or African-American patients it is only 29%. Latin/x patients fare somewhat better at 48%, while White patients have a 79% chance. 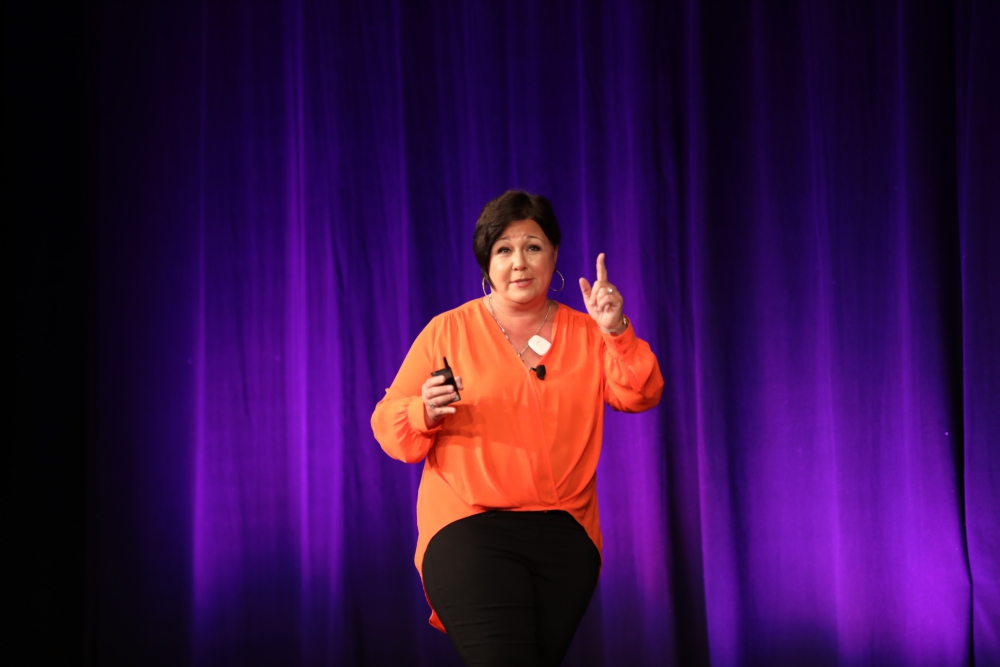 As she recovered from her leukemia treatment, she realized that she was not getting the type of care she needed for survivorship. She said that she was experiencing post-traumatic stress disorder and had no or few resources to help her cope with that. The suicide rate is 85% higher for people with cancer than the general population she said, and chemotherapy alone is a high risk for psychiatric disorders. According to research that she cited, “the single biggest risk factor for developing a mental health condition is treatment involving surgery, radiation, and chemotherapy.”

On the fifth anniversary of surviving AML leukemia, she learned that she had breast cancer. Once again, she was thrust into a system she describes as broken. Again, while she was grateful that her connections were a tremendous help in seeking and receiving world-class care, she saw that there were “silos and voids at every turn.” She pointed to factors that are serious issues in the healthcare system. Among them are the lack of support for the overall patient experience, outdated clinical trial recruitment techniques, no diversity in clinical trials and bone marrow donors, and no psycho-oncology or cardio-oncology support. Patients continue to face implicit bias and unequal access.

What we must do is reimagine patient care. Going forward it must strive for health equity and to close the gap in health disparities. Her mission, and the aim of the nonprofit she founded, is to educate about providing whole patient care. One key factor in this would be to invest in patient pre-hab. That is, there should be a focus on preparing patients physically for catastrophic illness. Her organization partners with others and volunteers to provide equal access to experts across the oncology ecosystem before, during, and after cancer. She emphasized the importance, particularly to communities of color, of risk reduction, health literacy, improved patient consent forms and video explainers, psycho-oncology, and survivorship programming and support. “Rather than asking patients to beat the odds,” she said, “it’s time we change the odds.”